Jurassic Jackaroo: Jasper’s Junction is my new book coming out. 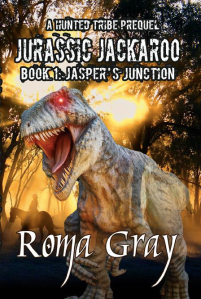 It is a prequel to the Hunted Tribe series.

Is there really anything better than dinosaurs and cowboys?

HOW DOES THE GREATEST GUNSLINGER OF THE OLD WEST END HIS CAREER? BY HUNTING A DINOSAUR ANIMAL SPIRIT, OF COURSE.

Karl Redgrave has big plans for his retirement party: He’s bringing together the world’s greatest criminals, murderers, warriors, and assassins to hunt something worthy of them all: a highly intelligent, seven-foot-tall dinosaur spirit, known to the natives as the Grishla.

Of course, Karl wants only the best on his safari, so he has pitted these men against each other in a deadly contest in an old ghost town, with five winners securing a place in the hunt.

Who will live? Who will win? And if they win, can they survive the final confrontation with the beast?