In today’s interview, we are very pleased to present the extremely popular Neil D’Silva, the author of Maya’s New Husband.

Maya’s New Husband is a disturbing psychological thriller that explores new territory in the Horror genre. Expertly written with strong imagery, it is no surprise that this novel has been very well received.

1) What gave you the idea for your book Maya’s New Husband?

Maya’s New Husband is a horror story set in Mumbai, India, my hometown. I aspired to be a writer ever since I 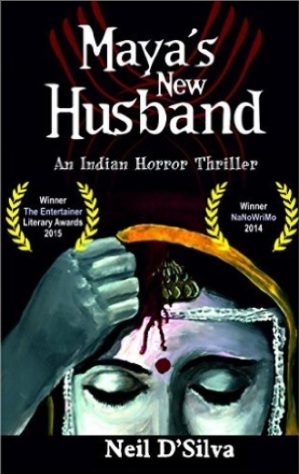 remember, and last year, I just had this grand epiphany that I mustn’t stifle my dreams any longer. So, when I was looking for a plot, I happened to visit the beautiful beach state of Goa. Sitting one evening on the beach there, I saw these happy Indian couples, many of them newly-wed (for Goa is a honeymoon destination) looking so content with each other. At that moment, a thought crossed my mind: How much do these people really know of each other? What if the partner they have chosen to spend their lives with has an insidious secret? What if they have married a rapist or a terrorist or a serial killer? Or even worse than that? This was the basic premise that helped me come up with the plot of Maya’s New Husband.

2) Is this your first published book?

Yes, Maya’s New Husband is my first published book. I got it out as an eBook first (self-published) in January 2015, where it immediately met with a favorable response. I next self-published it in its paperback version, and subsequently won an award in The Entertainer category at The Literary Awards 2015, India, hosted by Inside Stories. This prompted me to release the book on a wider scale through Authors’ Ink Publications.

3) What got you into writing horror?

Horror tempts me the most as a reader, and an author writes what he likes to read himself. I had read Dracula when I was 12 and went on to read several classics such as Frankenstein and stories from Edgar Allan Poe and H. P. Lovecraft. These people weaved magic with their words. Though I read other genres too, it was horror that affected me the most, and hence I took up as my genre as well.

There was (is) another reason as well. In my country, India, horror is a largely unexplored territory. For Indians, horror means supernatural stories involving bhoots and chudails and daayans. We rarely see horror beyond that. My brand of horror is different. I try to infuse horror in real-life situations, brought on by real people. In my small way, I am developing the genre into something not seen much in my land, and probably even the world.

4) What are you doing next?

I am now furiously writing Sapna’s Bad Connection, a story of another Indian woman trapped in another horror-inducing relationship. This will be followed by Kalki’s Bundle of Joy, which is a reincarnation story. I also write several short stories to put up on my website http://NeilDSilva.com/ and for a few anthologies that I am a part of.

I am also busy managing my Facebook group For Writers, By Authors which is a platform for published and aspiring writers to connect with their readers. Apart from this, I am half the owner of a company titled Pen Paper Coffee, a concept company that brings published authors to edit and proofread manuscripts from new authors.

5) What is it like being a published horror writer? What does your family and friends think?

Seeing my name on bookshelves along with my literary heroes had been on my wish-list ever since I began reading all those astounding books from a tender age. Today, I am published, and though I still have a long, long way to go (practically, my journey hasn’t even begun), I feel somewhat a sense of accomplishment. Overall, my family and friends have been amazingly supportive of my writing. My wife, Anita, to whom Maya’s New Husband is dedicated, was also my sounding-board and initial critic. While I write, she looks after the practical things and keeps the house running. Without that kind of support, I could never have been able to write.

My friends have been ecstatic too, but it was more difficult to convince them. But once the initial reviews were out, they began chipping in too. Many of my present friends are authors themselves, and they prove to be a great support system for my future writing processes.

6) What advice would you give aspiring authors?

Being an editor too, I would like to comment on the importance of good editing and proofreading. Today, it is very easy to self-publish a book, which has increased the number of writers in the world. But that’s not a boon all the way. The bane is this is bringing in a lot of substandard writing into the world. Often, I see things published that haven’t been worked upon, and this can be dangerous to the writer. Even if their books sell, they might get bad reviews on them, which could kill the book and even the person’s writing career itself. Hence, I’d like to say this to aspiring writers: After your initial manuscript is complete, spend time—a lot of time—with it to edit and proofread your work. Give it to several people to read it, and the more distant they are from you, the better. Only when you are completely sure of your work, send it out into the world and let it do its job.

More power to your writing, folks!