Trick-or-Treat Thrillers is very happy to present our interview with J. Tonzelli, the author of The End of Summer: Thirteen Tales of Halloween.

Halloween is our favorite topic here at Trick-or-Treat Thrillers (was there any doubt?) and that is what this anthology is all about. But if you think the stories will be like the Goosebumps series you read as a kid, think again. This book is very well written and the characters are real and complex. The stories stayed with me for several days…and nights.

When you read his book (and I hope you do) make sure to read the story The Halloween Girl of Coldsprings. That one gave me chills!

1) What gave you the idea for your book The End of Summer: Thirteen Tales of Halloween?

I kind of got the idea by accident. A few years ago I decided I wanted to start writing short stories on a regular basis. Not necessarily anything to have published – I just wanted to have something to work on routinely to keep my mind

sharp. That lack of restriction allowed me to write about any ideas or settings that I found interesting. I wasn’t afraid of exploring similar concepts or environments because it was only ever meant for my eyes. It was after a few stories that I noticed I kept setting the events on Halloween, or injecting some kind of Halloween/autumn ambiance into the story. Once I realized this, I challenged myself to keep going – to see if I could write enough stories to fill a Halloween-themed book, and I eventually did.

As for the individual stories, all of them have varied sources of inspiration: childhood memories, or myths, or real-life events. All of them have very different flavors. Some are scary, some pensive, and some funny – but Halloween is always at the core.

2) Tell us about your writing background. Any other published works? Contests?

I’ve been writing since I was very young, even though at that time I wasn’t writing anything terribly original. I mostly rewrote other stories I’d read, or plotlines for movies I had seen. I had my own version of the movie “Dawn of the Dead,” for example. One day I bought a couple blank journals from a mall bookstore and began writing short horror stories. They were pretty bad, considering I was eleven or twelve at the time, but they were also kind of charming in that kid way. I rediscovered those journals a few years ago and they read very differently with adult eyes, and it actually led me into evaluating those concepts again. Many of the stories I’d written as a child involved the “real” me investigating weird horror-based mysteries around my neighborhood, with my real childhood friends at my side. My writing partner and I wanted to try our hand at turning that concept of kid detectives investing creepy mysteries into books for younger readers, along the lines of “Goosebumps,” while spotlighting real-life issues that kids have to deal with on a daily basis. Those real-life issues sort of run alongside the more supernatural ones, so the kids have to deal with both of them incongruously. The first book in what we hope will be an ongoing series, which we’re calling “Fright Friends Adventures,” was published last October. It’s called “The House on Creep Street” and while it’s about a group of young friends investigating a haunted house on Halloween night, really it’s about bullying, and its consequences.

I also routinely write film-based articles and reviews for CutPrintFilm.com. I mainly focus my efforts on older horror and action genre offerings that have cult appeal, but I do a little bit of everything over there. I’ve had the opportunity to interview directors and actors who have contributed to films that I absolutely adore, so it’s been a great experience.

3) What got you into writing horror?

I’m not sure what my “gateway” was into the horror genre, but it began somewhere with horror films. I’ve just always had the bug, I guess. When kids my age were watching who knows what – “G.I. Joe” or “Fraggle Rock” – I was watching “The Monster Squad,” or the “IT” miniseries, or a handful of “Friday the 13th” sequels I’d taped off the USA network. They were pretty butchered, since all the blood and guts were cut out, but I still watched them over and 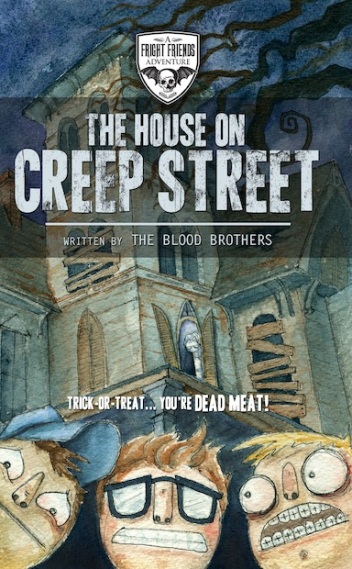 over anyway. And I remember I was over at my uncle’s house for a holiday – Christmas or Easter – and I wandered away from the dinner table and began looking at his VHS collection in the living room. One of them was “Night of the Living Dead,” which I put on at random, never having heard of it. (I was about nine or ten.) I spent the next ninety minutes terrified, but even at a young age I realized I had seen something powerful that really knocked me back.

During this time I was reading the “Scary Stories to Tell in the Dark” books, “In a Dark Dark Room,” R.L. Stine, later Stephen King. I was really fascinated by the idea that an author could scare you only with words, and without being in the same room as you. That felt like a super power to me.

4) What do your family and friends think about your obsession with Halloween?

Haha, it alllll seemed normal for a while…until I was in high school – right around the time I should’ve started growing up. And I kinda did. I’d stopped trick-or-treating several years before, but I started something completely at random which would become a tradition for nearly ten years: I would invite friends over, bring the TV out on the front porch, and we’d all watch really cheesy horror films while handing out candy to whatever trick-or-treaters came by. My family thought I was nuts – my mother wished I would entertain “more normal interests” – but my friends were into it. That and it was a hell of a lot of fun. People in the neighborhood began to anticipate seeing us every year as they walked their kids around the town. “Out here again this year?” Whether that’s good or not, I’ll never know – not that it matters.

The love I have for Halloween never goes away – it just changes forms.

5) Tell me about your favorite Halloween night and what you did.

I’ve had very good ones and very bad ones, but none really stick out in my mind that I would rank as more or less memorable. Although I remember once, when I was in high school, I was away at a high school band competition, which happened to fall on Halloween evening, so a couple friends and I slipped away from the school at some point, hopped the fence, and trick-or-treated up a couple streets. We had on our garish band uniforms, so we had the costumes already. We were only out for about an hour, but it was long enough to feel like we’d acknowledged the holiday. We probably got chewed out for having vanished, but it was worth it.

6) What are you doing next?

The second “Fright Frights Adventure” is in the beginning stages of publication; it’s called “Beware the Monstrous Manther!” I’m working on a couple solo projects right now. I don’t think I’ve cracked either of them as of yet, so for right now I’m considering them hypothetical only.

7) What advice would you give aspiring authors?

Show pride in everything you write.

It’s never been easier than right now for an author to have his or her work published, and that’s both good and bad. It’s good because there are many more venues for an author’s work to be read – you no longer need to spend months or years querying literary agents, the majority of whom won’t even open your letter in the first place. But it’s this new ease to be published that at the same time has kind of peed in the proverbial pool. Self-publishing physical books has become a big thing, and it’s even easier to upload ebooks to Amazon. But like anything else, with less restriction comes less quality and care. It used to be that a person who thought he or she had a talent for writing would suffer the long process of getting published via querying literary magazines or agents/publishers, but now it’s the opposite: a person who knows how much easier it is to be published is more apt to write something simply for the hell of it – because they can, so why not? Unfortunately, for the people who genuinely love to write and who have a talent for it, and who choose a self-publishing format for his or her work to be seen, it ends up leading to guilt by association. That makes me sound completely arrogant, and it’s not my aim to demonize the entirety of the self-publishing platform, or cast a blanket of judgment across all authors who utilize it, but it’s how I feel and it’s what I’ve personally experienced. I’ve read some of these self-published books and worked with self-publishing “publishers” who share this assembly-line mindset, and when you can read through one of their books and deduce that not even a simple spell-check was performed, it’s disrespectful to readers and offensive to other authors. I once worked with a self-publisher who actually complained – complained! – that I had found errors in the galleys he had sent me, because that meant he had to go back into the file to correct them.

If you want to write, then write, but show it the reverence it deserves, or else you’ll never be taken seriously.

8) How can someone stay up to date on your writing projects?

For solo stuff, feel free to follow me on Twitter (@JTonzelli) and check out my website (JTonzelli.com). All relevant links to various social media stuff can be found there. For anything pertaining to “Fright Friends Adventures,” check out TheFrightFriends.com. We’re also on Twitter (@EdgarAllanBlood) and Facebook (Facebook.com/TheFrightFriends).

Find The End of Summer: Thirteen Tales of Halloween on Amazon: http://www.amazon.com/End-Summer-Thirteen-Tales-Halloween-ebook/dp/B00FB2JRUG/ref=sr_1_1?ie=UTF8&qid=1436620155&sr=8-1&keywords=end+of+summer+thirteen

Find The House on Creep Street on Amazon: http://www.amazon.com/House-Creep-Street-Blood-Brothers-ebook/dp/B00NLXPZYY/ref=sr_1_1?s=books&ie=UTF8&qid=1436620362&sr=1-1&keywords=the+house+on+creep+street