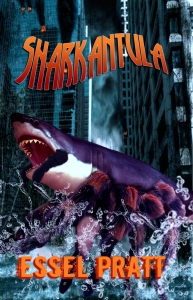 When a genetically modified tarantula finds itself loose in the Great White shark exhibit at Shark World, the feisty arachnid sinks its fangs into the main attraction. Without warning, the Great White mutates into Sharkantula and the opening day show turns deadly.

The mutated shark/tarantula hybrid is hungry and ready to feast upon the flesh of those that don’t run away fast enough to escape her webbing.

Desperate to stop the carnage, a group of Shark World employees join forces with the tarantula’s keeper in an effort to stop the devastation before Sharkantula can escape the confines of the aquatic theme park and spread her terror across the United States.

“With Roger Corman’s endless Sharktopus movies setting the tone for the endless Shark-whatever movies to come, birthing a strange sub-genre and crazed culture that peaked with the Sharknado series, it makes sense that the cult-lit world would take a bite out of the beast. And so, here were are with writer Essel Pratt (now THAT’s a name!) and his new novel Sharkantula. One would imagine that conjuring scenes of mutant shark monster carnage in the subjective mind would be far more vivid than the cheap CGI used in the films.”

I just spent the last half hour reading reviews on the infamous movie Sharknado, trying to figure out why we love our B-Movies so much and why this shark movie series in particular was so successful bringing back this genre. The reviews, I must admit, are so hysterical that, like the movie, my sides still hurt from laughing so hard. One reviewer gave the move only one star then wrote several paragraphs encouraged people to see it despite his one-star review; another reviewer compared it to watching a train wreck stating, “I couldn’t take my eyes off of it!”; but the most helpful review was someone who wrote “There is a fine line between stupid and clever, and this movie swirled around that line like one of their Sharknados.” I think this last reviewer pointed out the real fascination here – it’s the dance between campy and crappy, good and bad, scary and funny. If the dance is done well, the audience is mesmerized. If the dance is done poorly, well, the dancers fall into a heap on the floor and the paramedics are called in.

The book Sharkantula dances like a pro, somehow making the B-movie formula work in the medium of the written word rather than in glowing pixels on a screen. Sharkantula at first reminded me a bit of the old style B-Movies, starting out in a modern day Frankenstein-style laboratory. The situation then explodes as the experimental spider escapes and is inadvertently delivered to an aquarium. A brilliant move on the author’s part because now the story is told mostly from the point of view of a band of young adults, reminding me now of the “Halloween” and “Friday the 13th” movies. This book becomes almost a case study of the B-movie evolution over the decades.

It’s to a testimony to the author’s skill that he manages to keep on his feet during this complex number. There are no “accidentally good because it was so bad” moments, only “good because it was really good” scenes. The action is fast, the story unpredictable, and the danger (as well as the humor) is ever present. But always, always the reader is entertained.

Sharkantula is a definite must read that you will never forget, guaranteed.