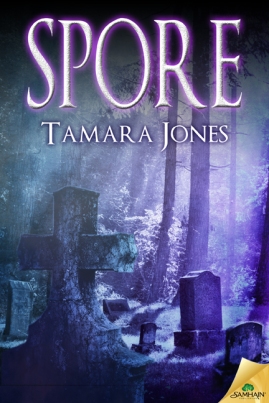 Today we present our interview with Tamara Jones, the author of the sci-fi/horror novel, Spore.

Spore provides unexpected twists and elements to the classic tale of the undead. It is a fast-paced story told  with believable characters and a strong imagination. If you have any doubts that you will enjoy this novel, her five-star rating and solid number of reviews should change your mind!

Book Description: The dead are coming back. Ten naked people walk from a cemetery into artist Sean Casey’s backyard: ten Spore People who used to be dead. One, Mindy, stays with Sean while trying to reclaim her life, but her ex would rather she return to her grave. Sean struggles to protect Mindy and other Spores while battling his recurring-and worsening-nightmares. Meanwhile, the media feeds a panicked frenzy that leads both the hopeful and hateful to Sean’s front door. As the Spore fungus spreads, so does the fear. When mutilated children match Sean’s nightmares, he realizes his own worst terror may be closer than he thinks.

What gave you the idea for your book Spore?

I got an idea (I call them nuggets) about an artist who wakes up from a nightmare to find naked people walking into his yard. I started it, set it aside, then picked it up again years later. Once I hit Sean’s realization that Mindy had died two years before, it pretty much grabbed the narrative reins and galloped right along after that.

My life is often chaotic, since I hang out with my 3-1/2 year old granddaughter most days. I tend to write at night when the house is quiet, and I start by reviewing what I’d written the day before and fixing the obvious mistakes – usually typos, soggy sentences, etc. Once that’s done, I move forward as far as I can until I absolutely need to get to bed. The next day, I read the previous night’s work, fix typos, and continue from there. I never go back to the beginning and read everything until the book’s completely finished and I’m ready for the full revision. It’s always forward, forward, forward.

This works for me because I can’t see plot, character, thematic, or pacing issues until the entire book’s written out. Some writers can fix that stuff as they go, but I generally need to see the whole novel as one sprawling beast before I can give it a bath and make it presentable.

What got you into writing sci-fi/horror?

I’ve always written fiction with some sort of speculative bent to it, and I’d often use writing as a means to vent off frustrations. Facing the decline and eventual death of my father led to what became my first published novel, Ghosts in the Snow. It was the seventh novel I’d written, though, so there was quite a lot of practice (and venting) before I stepped out of the shadows.

Did you self-publish or go through a traditional publisher? Which do you think is better and why?

My novel length fiction is traditionally published, but I have self published a few short stories. I don’t necessarily think either way is better, they both have their good points and bad. It’s more a matter of what best fits the writer and the project. I know what my strengths and weaknesses are. I’m a writer, not a marketer, editor, or book packager. I absolutely do not have the skill set (nor inclination) to take on all the roles needed to self publish book-length fiction. Lots of other writers do, however, and they’re happily selling lots of books. I’d rather focus on the narrative and leave the rest for someone else to handle.

If I could only pick one book to take with me while stranded on a desert island, it’d be THE STAND by Stephen King. I know it’s almost forty years old, but it still speaks to me on a rippling, visceral level. I love the sprawling scope of the narrative, the characters, the twisted nightmare quality of it. I have three copies in the house as I type this (including my first mass market paperback copy from 1980 I read back when it was a brand new release), I love it so much.

Eating a bowl of watermelon.

If you mean what’s next for writing projects, I’m awaiting edits for my first graphic novel, GhoulBane, based upon the comic Sean draws in SPORE (it’ll be published by Cohesion press in 2016), plus I’m working on the fourth Dubric novel (as yet untitled), and a speculative thriller, SLIPPAGE, about special kids on the run from a murder rap and an assassin.

Read a lot, write a lot, and learn to love and understand verbs. They’re the key to strong narrative.

To learn more about the Author and her book: