Today, we are doing something a little different. Instead of interviewing an author, we are speaking with the owner and editor of Jack of No Trades Productions Magazine, Nathon Allen Balka

Jack of No Trades Productions is an online magazine publishing company specializing in written works of fiction, non- 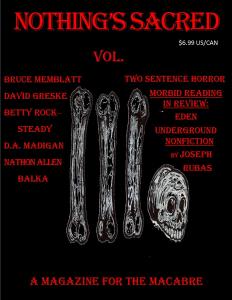 fiction, poetry, and articles from talented new authors entering the market, as well as already established writers. Our objective is to enlighten, enthrall, and entertain you, our customer, by offering selected works in the genres of Children’s, Science-Fiction, Inspirational/Spiritual, Murder/Mystery, and Horror. Each genre has its own respective magazine to ensure a truly unique, and user-friendly experience.

What gave you the idea for your business Jack of No Trades Productions?

In 2005, I was working an unfulfilling, full-time night job while going to college. I had pondered the idea of owning a business a couple times before, but I wasn’t sure what type at the time. College helped change that because of needing to nail down majors for the course work. I started out as an English major, having a passion for writing. About two semesters in, things began evolving. I had a desire of having control over my own work. I had a friend who was studying Import/Export Business, and he suggested that I take some business classes. Later, a chance conversation with a coworker gave me the idea for the name when he told me, “’You’re a jack of all trades around here.’”

Your company currently produces one magazine, Nothing’s Sacred, and you also have plans for three upcoming magazines: Serenity Rising, Chalk Line, and Empire. Tell us about them.

While I love horror, and have as far back as I can remember, I realize not everybody’s taste in reading is the same. So when I built the business model for Jack of No Trades Productions, I asked myself if I wanted to cater to just a niche market or have a broader range of readership. There are some indie publishers out there who are fine with catering to niche markets. Some of those succeed while others do not, and there’s a variety of reasons for this. Their business names usually indicate the type of markets they cater. The beautiful thing about Jack of No Trades Productions is that the name is ambiguous enough to house a multitude of divisions.

Being a Star Wars and Star Trek geek, if I wasn’t writing horror, I’d write science fiction. While there tends to be some overlap among the genres, what I have in mind for the Empire magazine is that it will be predominately science fiction and fantasy. Just thinking about the possibilities is exciting because they truly are endless. Could mankind colonize another planet? Is there life beyond our galaxy? If mankind was forced off of Earth, could we survive? What kind of magical worlds lay beyond our own?

Growing up, I always loved watching reruns of Alfred Hitchcock Presents so I envision Chalk Line to be a crime, suspense, “who did it,” type of magazine.

There’s a spiritual side to me that I don’t tend to talk about openly with most people simply because we all have our own beliefs regarding religion and I don’t care to get into a pissing contest with anyone as to who’s right and who’s wrong. Having said that, I want Serenity Rising to be an uplifting, spiritual mix of fiction and nonfiction for the non-denomination. Regardless of what one’s personal beliefs are, I’d like for the reader to be able to come away from the magazine with something useful for their every day lives.

What got you into writing and publishing sci-fi/mystery/horror?

Teachers, listen up! Ineffective teaching and testing will push your students further away from you and your lessons if you bore the shit out of them! What got me into writing was the blatant lack of the school system being able to get my attention during standardized test taking time. I would “C,” my way through the test, and not give a fuck about the end results because they were boring. As I recall, the test the schools would give their students (25-30 years ago), would have about 100 questions that you answered A,B,C, or D — there may have been some true or false in the mix, I can’t recall — then, there was an essay section of the back page. The writing prompts for the essays never seemed to apply to me; it was seemed like I was the outsider looking in. Again, they bored me. So, I’d scrawl a couple thoughtless line of bullshit on the page, and consider it done. The entire process would maybe take twenty minutes of a two hour block of time, which meant that I’d be sitting for the next hour and forty minutes with nothing to do. But there was a silver lining: the teachers always gave each student a couple extra pieces of paper in case you needed it for the essay. In the seventh grade, I used those two pieces of paper to imagine that I was anywhere but sitting inside four walls. That’s what got me writing. How I got through school without never failing a grade along the way is still but a mystery. *Grins.*

You also write short stories. Can you tell us about some of your favorites and where readers can find them?

Picking a favorite story is like being asked to pick your favorite child. It can’t be done. Even the bad ones from years ago are my favorites because they captured a moment equal to a photograph or a piece of music. In my professional career, I’ve had a handful of short stories published in a couple different magazines. Last month, my short story, “’Til Death Do We Part,” appeared in the Australian magazine, Far Horizons: Tales of Science Fiction, Fantasy and Horror (Issue #18). It can be found at http://www.joomag.com/en/newsstand/far-horizons-tales-of-sci-fi-fantasy-and-horror-issue-18-september-2015/0213490001442428393

What’s it like to run a magazine. Any interesting stories?

Crazy. It’s an absolute nuthouse, lol! Seriously, it’s really exciting. I get to work with awesome authors and artists, and read fantastic stories. Then I get to see the transformation of a file on somebody’s computer, that many don’t know exist, change into this tangible item that anybody may lay in their hands. It’s something really special.

As soon as Nothing’s Sacred Vol. 3 is released, I’m going the pick up where I left off on another short story, and get back to work on my debut novel. Since taking submissions for the new magazine, I haven’t written anything and it’s time to change that.

Step 3: Break out a note pad and pencil, or your computer.