Today’s interview is with Kindra Sowder, author of the horror series Executioner Trilogy

Description of Book 1 to the Executioner Trilogy: Follow the Ashes

What does it mean to be the Executioner? Is it the struggle between good and evil, and the fulfillment of a Gypsy legend? For Robin, it’s simply another day in the park in downtown LA. It’s killing the undead as she attempts to juggle 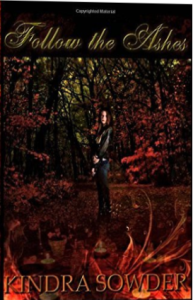 life and love the same as any other ordinary woman would. That is until she meets Gordon, a crazed demon with a conscience. Now she must battle an ancient evil far more powerful then she’s ever faced before, or risk losing the world to Lilith, the mother of all vampires. Will she save mankind? Or will we all follow the ashes of destruction as we burn in Hell?

She was born and raised in Rancho Palos Verdes, CA until the age of 12, when her family moved to Spartanburg, SC.

Kindra graduated from high school in 2006 Me with full honors and as a member of her high school Literary Club and the Spanish Honor Society. In January 2014, she graduated with her second degree in Psychology, earning her an AA and BA in the field. She began to write long before this though, forming the basis for the Executioner Trilogy at the age of 15.

Married to her husband Edd Sowder in May 2014, she still lives in Spartanburg, SC where she is basing Burning Willow Press.

Follow the Ashes has earned her nominations in the following categories: Best YA Author, Best Cover Art (cover art by Lisa Vasquez), and Best Female Indie Author in the IAFC Awards! Her work “Hello, My Name is…: A Miss Hyde Novella Volume 1” has also been recommended for a Bram Stoker Award for 2015 and was nominated for Book of the Day’s 2015 Summer Book Awards Best in Horror Award.