Trick-or-Treat Thrillers presents our interview with Kat Doughty, the author of the haunting novel To the Dark.

Lucianna’s life is nearly perfect. She has a loyal best friend, the perfect boyfriend and has been distinguished as one of the best among her peer sorcerers. That all changes after she meets James, a handsome warlock. With their 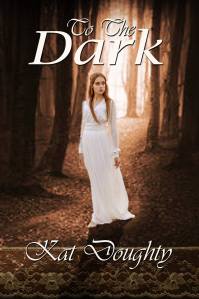 relationship progressing, Lucianna discovers that the world of magic has a dark side, but it is too late to stop her world as she knew it from crumbling into pieces.

What gave you the idea for your To the Dark?

I was nineteen and I was working as a maid in a hotel in Germany. You probably noticed by now that cleaning is not the most mentally challenging work out there, so while at it I was entertaining myself with stories I made up. There were only a few that stuck in my head over the years and To the Dark was one of them. The story itself sort of developed from a typical late teens early twenties desire to change the world, in this particular case the way certain minorities are treated in a mostly uniform society. Basically what I am trying to say is that the Dark Ones are pretty much based on European gypsies.

What got you into writing supernatural romances?

I am going to say that this one was most likely a one of a kind book for me. I came up with the idea when I was nineteen, single and if you jump forward fifteen years I needed a story I knew well enough to make into a book. The next book which is due out in December will be part one of a post apocalyptic trilogy and that’s where I have been ever since. At this point I think of myself more as a fantasy writer. You can psychoanalyze it as either my attempt to escape reality or a way to deal with the hard topics where they seemed sufficiently removed from my life. Either way, fantasy is my literary home.

Other than To the Dark I have a short story in a fantasy anthology from J Ellington Ashton Press which will be called Lost Gods and Forgotten Cities. The big one that I am very excited about is the trilogy mentioned above. It’s based in a world where the majority of humans live under these creatures called the caretakers until they turn eighteen year old. On their eighteenth birthday there is a Hunt that almost always ends up with the teenager dead and the first book starts with the main character waking up on her birthday…

I don’t have writings days. I have a special needs six year old, three year old triplets and a three month old baby. I write when I can get it in, usually by ignoring something else that I should be doing, for example exercising or cleaning the house. Oops. The upside is that I usually have plenty of time to figure out what I want to write about before I ever get to the keyboard, so once I am there I just type.

Pride and Prejudice, although I base it on the fact that that’s the book I have read the most in the last few years. I am not exactly sure why it’s been my favorite to be honest. There are so many great books out there, but for some reason this one keeps drawing me in and yes, I am the person who reads and rereads books all the time. I admire a lot of the big names, Bradbury, Clarke, Rowling and I enjoy reading the independent authors too, most recently The Morwich and the Dragon by Jen Redmile. Anything that has a novel idea or an interesting aspect will do it for me.

First I need to finish the trilogy I am working on. I am in the final editing stages for book two and about one fourth through the first draft of book three. When I get that done there are two sci-fi ideas that I am toying with or one almost fantasy book that is very near to my heart. I could really use more writing time!

I am not sure I am in a place where I can give advice yet, but for me getting To the Dark out was a step I had to take, even though it was not a book I was planning on ever writing. As pretty much every other writer out there I always wanted to write a book, I just didn’t know what about. In retrospect, the problem wasn’t a lack of ideas on my part, but rather the inability to actually create a book out of them. To the Dark was the most developed story I had in my head and getting it out taught me how to make it happen. From that my advice would be to do whatever it takes to start, the rest will come together somehow.

Kat is a mom to four active boys and a little girl, which is why she needs a fantasy world or two to escape to on a regular basis. When she’s not busy writing or trying to keep her children alive, she is probably hiding in the pantry.