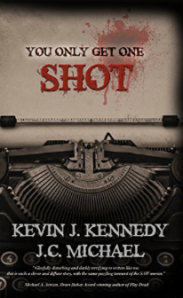 Book Name and Description: My most recent published story is The Immortal Dead in Suspended in Dusk II from Grey Matter Press. Alongside stories in numerous anthologies I have also had Just One Pound & Meetings With The Devil published by Pint Bottle Press as part of their Double Barrel Horror series, and released the novella You Only Get One Shot which was co-written with Kevin Kennedy.

I’ve been reading, and watching, horror since my early teens in the late 80’s so when I started writing it was only natural that it would be within this genre.

I started writing in 2007 when someone challenged me to write something since I would often comment about how I would have done things differently when reading a book, or watching a movie. Never one to do things by halves I made a start and the end result was a 90,000 word novel.

I self published that novel, Discoredia, in 2008. It’s something I really shouldn’t have done as it wasn’t polished enough by 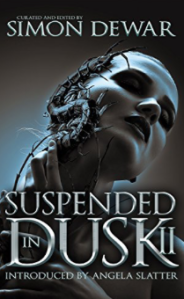 any stretch of the imagination. Anyway, not too much damage was done as I think I only sold three copies! Fast forward a few years and after the birth of my son I deciced to resurrect the idea and put it up on Authonomy where it was torn to shreds, and rebuilt in a much better form. I also made some good friends on that site, one of whom put me in touch with Books Of The Dead Press who published Discoredia in 2013. Everything else has come about as a result of that, but I’ve focused on shorter pieces as I have a pretty full on full time job and can’t commit the time and energy I’d need to write anything of that size and scope again. Unfortunately Books Of The Dead Press has now closed down so Discoredia is currently un-published, but I’ve still got over a dozen short stories out there in various anthologies, plus the novella, You’ve Only Got One Shot.

There’s no such thing as a typical writing day for me as it’s something I have to fit in around work, running a home, and looking after my son. It’s just a hobby for me, so I write when I can or if I see a particular anthology I fancy having a crack at. Influence wise it has to be those books and authors I read during the 90’s – predominantly Stephen King, James Herbert, and Clive Barker.

To pick a favorite is hard as nothing jumps out as head and shoulders above everything else, and I can’t read a book more than once as I don’t get the same enjoyment once I know what’s going to happen. If I had to pick a handful of favorites though I’d have to say The Stand and IT by Stephen King, Carrion Comfort by Dan Simmons, and more recently NOS4A2 by Joe Hill and Justin Cronins Passage trilogy. When it comes to something that has disappointed me I’m afraid I’ve got to say Doctor Sleep.

How do you think you’ve evolved creatively?
I’m not sure how I’ve evolved creatively as I was so full of ideas when I started out and as I gradually work through those I actually find it harder to come up with something new and different that doesn’t touch on themes I’ve covered previously. Where I hope that I have evolved is with the more technical aspects of my writing, such as having a better idea of where to put a damn comma (which I no doubt still get wrong far too often).

What piece of your own work are you most proud of?
That would have to be Discoredia purely because of the size and scope of it, and there are sections of the book that I still feel are amongst the best passages I’ve ever written. Without that I wouldn’t have written anything else, or had the opportunities that have come afterwards.

For those who haven’t read any of your stories, what story/book of yours do you think best represents your work and why?
I’d love to say Discoredia but it’s out of print, as is the anthology Suspended In Dusk which contains one of my favorite short stories Reasons To Kill, another unfortunate result of the closure of Books of the Dead Press. I think if anyone wants to get a real taste of my work their best bet is to take a look at my Double Barrel Horror stories Just One Pound and Meetings With The Devil, either as the single double header or in the Double Barrel Horror collection which brings together the first set of volumes in that series. I think anyone reading those stories will see how I like to write about the darker side of human nature, and don’t shy away from a bit of violence and gore but also like to try and leave readers with something to think about.

I’ve a couple of short stories I need to write for anthology calls and would love to find someone to publish Discoredia for me. I’d also like to put together a collection of the various things I’ve had published to date, with a few original stories thrown in for good measure, so that anyone who does like my work can grab those stories all in one go rather than having to pick up a whole raft of anthologies.

Don’t rush to self publish, don’t give away your work for nothing, or for “exposure”, unless it’s an anthology you really want to be a part of, and pick who you work with carefully. It’s a great feeling to be published, and tempting to line up as many credits as you can, but reality soon kicks in when you see an anthology that doesn’t sell other than a handful of copies to the contributors and when you get hold of your own copy, that you’ve paid for out of your own pocket, you wince at some of the editing and pieces that were accepted. 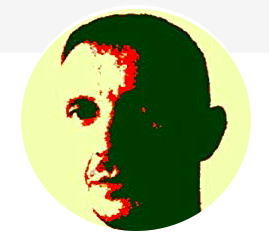 J. C. Michael is an English writer of Horror and Dark Fiction. His novel, “Discoredia”, was released by Books of the Dead Press in 2013, and he has since seen a number of short stories published in various anthologies. These have included the best selling Collected Christmas Horror Shorts, and Collected Easter Horror Shorts, compiled and published by Kevin Kennedy. Michael and Kennedy also co-authored the novella, “You Only Get One Shot”.