Today we are interviewing Holly Jolly,  the canine friend of the well

Hi Holly Jolly. What gave your human the idea for his novel Marionettes? Tell me the truth, was it really your story?

Well, by answering this question, I’m giving away the fact that my daddy—my human, Kerry—and I share each other’s thoughts. Actually, the story is sort of about that. A man drowns in a flood, and when he’s resuscitated, he comes back from the other side with the ability to jump into people’s minds and bodies and control their thoughts and actions, turning them into his human puppets. He calls himself the Marionette Man. That’s what I do with Kerry sometimes, but shhh! Don’t tell him. I don’t think he knows yet. I sometimes make him give me extra treats and take me on walks and outside to play when he thinks he’s too busy writing to take a break. 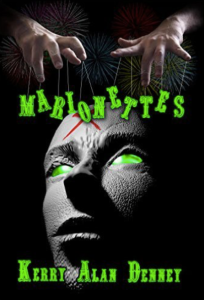 Considering that Kerry and I share each other’s thoughts, it sort of is my story too. He writes about dogs a lot because he loves us so much, and there’s a heroic Golden Retriever in Marionettes named The Mighty Quinn. Kerry says I inspired him, and that I inspire the creation of a lot of the dogs in his stories.

Kerry’s really excited about the release of Marionettes, and I am too. He says when I’m happy, that makes him happy. Well, when he’s happy, that makes me happy. It’s a tail-wagging win-win situation for everybody.

We’re hoping everybody will come join us on Facebook for the MARIONETTES Book Release Party on Sunday, June 5. We’re giving away lots of prizes, like Amazon Gift Cards and ebooks, and a special Grand Prize. Everybody will have a chance to win. I will be posting there some too, so come join us for the fun!

I hear your human wrote a short ghost story about a man and his dog that he’s working to get published. Can you give us a sneak hint about the story? And honestly, did you write this one, or inspire it?

His story is called “Sweet Baby James.” It’s about a man named Jack who sees the ghost of his dead mother late one night, and discovers a life-changing secret about something horrible she did when he was just a baby. It’s creepy and disturbing.

There’s a Golden Retriever in it too, named Duke. He’s a good boy. The story starts out with Jack reading on his couch at night with Duke snuggling by his side, which is something Kerry and I do a lot. He says I’m the best reading companion ever. I’m a professional Therapy Dog, and he takes me to the library three Saturdays a month for two R.E.A.D. programs (Reading Education Assistance Dogs) called “Doggie Tales” and “Read to Rover” so kids can read to me and pet me. I get lots of belly rubs! It makes everybody happy.

So yeah, although I didn’t actually write it, Kerry says I did inspire it, so this one is sort of my story too. I can’t wait until he finds a publisher for it! 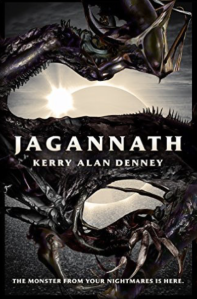 What other stories has your human stolen from you?

He doesn’t really “steal” them from me—it’s more like I give him little mental “nudges” here and there when smoke is coming out of his eyes and ears because he’s trying too hard to think of story ideas.

One of my favorite stories he’s written and published is a short story about an amazing therapy dog. It’s called “Old Coot.” The dog is a female Golden Retriever, like me. Kerry says I definitely inspired this one because I’m such a good therapy dog.

He has lots of dogs in his published novels too. I love Doc and Kadie from Dreamweavers, Spook from Jagannath, and Dante from Soulsnatcher.

He has another novel, a post-apocalyptic/ paranormal thriller about the end of the world called A Mighty Rolling Thunder, which is being published December 3, 2016 by Burning Willow Press. It has the coolest dogs ever, T-Rex and Beauty (and Cisco and Pancho too). In the story, the weird spirits that cross over into our dimension give dogs a gift: They can send telepathic images to humans, communicating with them! Of course, I already do that with Kerry. He says that’s what inspired that story idea.

Honestly, why do you let him write? Doesn’t this take time away from you?

Kerry loves to make me happy, and do things with me that makes me happy, like take me swimming in the lake up at Stone Mountain Park, and taking me for hikes in the mountains and walks in the neighborhood, and playing fetch with me in the yard. He even took me to Fort Fisher Beach in North Carolina a couple of times, where I learned how to body surf! I love the ocean, even though it tastes yucky. There’s so much water to swim in.

I like making him happy too, and writing makes him so happy. I think his head would explode if I didn’t let him write, and I don’t want that to happen. We still have so much playing, sharing, reading, and loving to do. He’s very fair about spending lots of time with me, so I try to be fair about giving him time to write.

Plus, when he does this thing he calls “Quittin’ time, I’m clocking out!”, he lets me snuggle up with him on the couch while he reads or watches movies. I love touching people, and getting petted, and especially getting belly rubs and back scratches. So we share our time together pretty fairly. I can’t complain. It’s good to be the dog.

What is the writing process like for Kerry? Does he 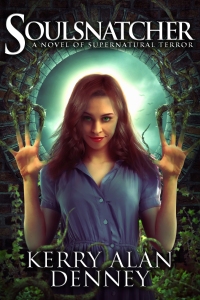 selfishly lock himself up in his office and ignore you?

His office is also my playroom, with my bed and food and water bowls, so I get to spend the day with him. He calls me his Special Writing Assistant. We start every morning with a potty break and then a little playtime in the yard. Then he writes until lunch. After that, we take another play break. Then he writes more in the afternoon. We take a walk break sometime during all that. After we walk, I take a nap and he writes some more, sometimes until well after it gets dark outside. But we still take another play break when he’s done for the day, right before dinner.

Sometimes, he does what he angrily calls “Damn Social Media Marketing and Promo Shit!” He often yells and throws paper stuff and pens (never at me) when he’s doing this. I think he doesn’t like it so much. I look at him with a worried expression when he does this, and he always pets me and tells me it wasn’t my fault, or about me, then I’m okay again. I think he needs to find someone to do all that stuff for him so he can be happy all the time.

What is your favorite book, and why?

That’s a tough question. I like them all, mostly because they have such cool dogs in them. I guess my favorite would be A Mighty Rolling Thunder, because dogs can finally communicate with humans in it.

See, we—all dogs—have always been sending those mental images to humans the way the dogs do in that book. Humans just have like these clouds in their heads that block the messages from getting through. Some humans are better at getting the messages than others, and some dogs are better at sending the messages than others. We call those dogs “People Whisperers.” I think the world would be a much happier place for everybody if all humans didn’t have those clouds in their heads, and understood us.

What is Kerry doing next?

Writing another new novel, and trying to get his other works published, what else? I think we need to take another vacation to the ocean. He can still write there, and I can go body surfing in the waves again, wheeeee!

What advice would you give pets of aspiring writers?

That’s an easy one: Make friends everywhere you go, both two-legged and four-legged, be patient, affectionate, and loving with your human, run and play like there’s no tomorrow, and above all else, live your lives with wind-in-fur.

Check out lots of pix of me, Holly Jolly, here: http://www.kerrydenney.com/photos.html