Trick-or-Treat Thrillers is pleased to present our interview with Essel Pratt, the highly imaginative author of the novels ABCs of Zombie Friendship and Final Reverie! 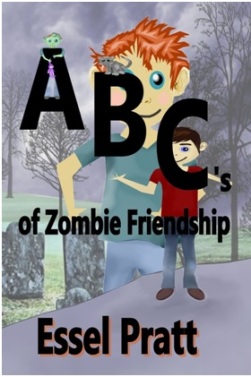 Bonds of friendship exist eternally within the confines of children’s hearts. Neither a move to a new town nor an unthinkable expiry can remove the bond that joins true friends together. Not even when one becomes a zombie. Matt doesn’t allow the death and reawakening of his best bud Tate to dissuade him from adventures of youth. In the ABC’s of Zombie Friendship the lads remain close and the alphabet expresses their bond one letter at a time.

Many years after the downfall of technology, magic has reclaimed its position within Earth’s ecosystem. Over time, the delicate balance of between good and evil has weighed heavily toward the malevolent side, despite attempts at stabilizing the equilibrium. Two heroes, Franklyn – an adolescent boy, and Chij – his wolf brother, travel the land with a sole purpose of helping those that cannot defend themselves from the creatures that lurk and feed upon the weak. Their carefree travels are unexpectedly given a

larger purpose when they are tasked to search for, and destroy, the nefarious being known as Nafets – who was imprisoned many years prior but teeters on the edge of reemergence. Throughout their journey, Franklyn and Chij encounter heroes of the past that guide them toward the final battle, as well as Atrin – an aspiring adversary that wishes to overthrow Nafets and claim his seat upon the throne of malevolence. Franklyn and Chij endure an emotional journey filled with blood, tears, and self-discovery as they encounter the unexpected and become entangled in a expedition that will test their abilities and emotions.

What gave you the idea for your book ABCs of Zombie Friendship?

ABC’s of Zombie Friendship started as a project I wanted to create with my daughters. I planned on writing the verses while they worked on the illustrations. However, as teenagers often do, they gave up on the idea and left it in a “work in progress” folder on my computer. As I was reviewing some of my unfinished works, a couple weeks later, I saw it there and decided to submit it to J. Ellington Ashton Press, my publisher, to see what they thought of it. Catt Dahman, the CEO, saw the piece and fell in love with it. She volunteered to complete the artwork and it became a reality. I have fallen in love with the end product, nearly instantly.

You also wrote the book Final Reverie which seems to be aimed towards young adults. Why the change in target market? Which target market do you prefer?

Final Reverie came out prior to ABC’s of Zombie Friendship and was quite a change from what I normally write. Typically, I write horror. However, an open call came out for an anthology about animal companions, told from their perspective. I wrote the story and was accepted into an anthology, but the actual characters would not leave me. I found myself outlining the entire story that led up to the events of the short story, and immersed myself in their world. The concept is that technology has long faded from the planet, allowing magic to re-emerge. Yet, the evil magic has started to out-weigh the good, and the two heroes, Chij (a wolf) and Franklyn (a teenager), are tasked on the journey to rebalance the world. With help from some past heroes, the two take on the journey and accept the world’s fate is in their hands.

My preference for a target market is both young adult and adult, although I don’t tend to allow myself to be restrained to one genre. I like young adult because I can grow with the readers. Those that read Final Reverie, may grow to read other works that I create in the future.

When I went on Amazon I saw you had many, many short stories to your credit. How many have you written? Which do you prefer, short stories or novels?

Currently, I am published in 43 books, with about 45 pieces published within those books. Three of the books are my own, the rest being anthologies. Within the pages, I have poems, flash fiction, and short stories. I really like to write short stories because the anthologies typically challenge me to a specific theme, some of which are outside of my comfort zone. They are fantastic practice for any author, plus they keep my works out there while I work on larger pieces.

What got you into writing sci-fi/horror/fantasy?

Since childhood, I’ve read constantly. The first book I read all the way through on my own was the Boxcar Children. Then, I continued onward to the seven books within the Chronicles of Narnia, and eventually I was introduced to Stephen King and Clive Barker. So, I think Sci-Fi, Horror, and Fantasy just came natural. To me, C.S. Lewis and Clive Barker are equals in their genres, both taking the reader on a journey through fantastic worlds from alternate points of view. So, I like to think of my style as a happy medium between the two, blending each of the genres together.

My writing process is chaotic, at best. Short stories are typically written off the cuff, making them up as I go. Novels and longer pieces are outlined and written with the details already mapped out. I typically write on the weekends and edit during the week. However, I also write for the Inquisitr, an online news site, which keeps me writing a little throughout the week.

My all-time favorite books are a tie between the Chronicles of Narnia series and Clive Barker’s Cabal and Everville. Each is mysterious in their own ways. Narnia has the mystery behind how the children enter Narnia and why they are there, which is brilliantly revealed at the very end. Cabal and Everville take the reader on a fantastic journey through Barker’s mind. As a horror writer, he is brilliant. I often wonder what he would create if he tried strictly fantasy.

Upcoming, I have nearly ten signed anthology contracts, just waiting for publication, and a couple novels that are in the beginning process. I’ve spent a lot of time on anthologies this year and think I will focus on books next year. I am also co-host on Blog Talk Radio’s “Wicked Little Things”, every Friday night at 8:30 EST.

The best advice I can give is to just write. It may sound cliché, but it really works. In the beginning, I would rewrite the

same paragraphs over and over until I eventually gave up on the pieces. Then, I decided to just write and go over it later and edit. The difference was astronomical. With a finished piece in front of me, regardless of how raw it was, going back through and editing/rewriting was a rush and kept me motivated. If you don’t write, it won’t get done.

Reach the author at the following links:

Find the author’s work at the following links: