The rugged beauty of the Mount St. Helens wilderness is being haunted by a killer. Hikers, loggers, and local residents

are dying in horrible, mysterious ways, and lawmen Bud O’Brien and Charlie Redtail are forced to think it just might be a monster … maybe Bigfoot itself.

Enter Cryptozoologist Dr. Ian McDermott, Ph.D., who struggles with his own personal demons as he uncovers the impossible and ugly truth behind it all – an evil more malevolent than anyone ever imagined.

Loup-Garou is the first in the Ian McDermott, Paranormal Investigator series. Atmospheric, often beautiful, and always intensely scary investigations into what we were told as children were only myths and legends.

The hunt is on.

What gave you the idea for your new novel Loup-Garou: The Beast of Harmony Falls, the first book of your new Ian McDermott Paranormal Investigator series? Tell us about the series as well.

Well, Loup-Garou is not a new novel. I released it sometime back as an indie author … but, it along with the Ian

McDermott franchise of stories were picked up by Permuted Presses new imprint, Winlock Press. Winlock Press released three of my books in 2015 … two of which were part of that series. Recently, I regained the rights to my books, and have released them once again independently.

What got you into writing sci-fi/horror?

I’ve no romantic answer for this question. As a kid I was always fascinated by monster and sci-fi movies and such. Writing about such topics just came natural.

Unlike many authors who feel they must write every day, or somehow they’ve let themselves or the process down. I’m a streak-marathon writer. I only write when it feels right. I never try and force the process. But, when I do write … often I 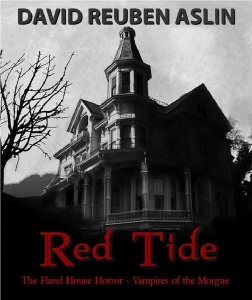 write for many hours at a stretch. Sometimes days on end. I’ve never concerned myself with the concept that I must write (X) number of words or pages per day. When I’m not physically writing I’m thinking about the story and where it’s going. I tend to pre-write in my mind far ahead of where I’ve reached in type. Occasionally, I use outlines … but typically, I write the story in my head (at least the generality of the story) before I begin key-stroking it.

This could so easily be a very long list that spans many genres and sub-genres. So, let me take on the question from a slightly different perspective. Like say, what is my favorite topic and what book is my favorite within its genre. My favorite topic is vampires and werewolves. My all-time favorite vampire novel is, Salem’s Lot by Stephen King.

I’m currently working on two separate novels that are unrelated to each other. 1) I’m working on the fourth installment

to my Ian McDermott books: JACK-KNIFE … which takes place in England during the height of the Victorian age (within the theatre of Ian’s accident-injured, comatose mind). And, an all-new series that takes place approximately thirty years into the future called: BRAINS, BACON, BEER & ZOMBIES – A Tongue and Cheek (and other body parts) Apocalyptic Thriller.

Research your topic(s). If you’re writing fiction. Try to write in such a way as to create as much suspension of disbelief that your topic will allow. That, and a little (not overused or forced) well timed humor never hurts to help keep your readers engaged. Don’t get caught up in the idea that you need a publisher. Publishers can be fine, but they are not by any means the only path to success. Though I am by no means an expert on the subject, I have walked both paths (I’ve been both a contracted writer with a publisher … and an indie author). Write for yourself, if you’re not having fun … it’s not worth the countless hours of effort. Perhaps more important than anything in my humble opinion, you must have … or, learn to develop … thick skin. You will on occasion receive less than positive reviews. Learn from the critical reviews that upon reflection and deliberation, make sense. And mentally as best you can discard the ones that were merely written by sad vengeful trolls … lol! The positive reviews you will receive likely will far outnumber the later. But, don’t take the positive ones too serious either. And for heaven’s sake, don’t take yourself too serious! Lol! WRITE ON!!!

Find more of David’s books at the following Link