Discussion about why he created audiobook for his two Zombie Road novels. 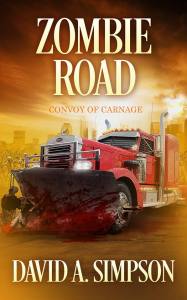 II: Bloodbath on the Blacktop

The first book in a thrilling new series.
The people that tried to kill the world were fiendishly clever.
After decades of planning, the contagion was unleashed and overnight hundreds of millions died and came back as rampaging, undead monsters. The living that had been lucky enough to survive the first day of carnage, lucky enough to be in the right place and lucky enough that some of them had the skills they needed, soon found out there was much more to worry about than just zombies.
In the high desert on the outskirts of Reno, there is an old truck stop frequented by a mix of hard caliber truckers, day tourists, musicians and travelers. They have survived the chaotic first hours of contact with the undead and now must make their way across the country to a location they believe is safe. Zombies are only the beginning of their troubles as they try to cover the thousands of miles of open road with their hastily armored 18-wheelers. Gunny, a long haul trucker doing one of the few jobs available to him as a disgraced soldier, is unwillingly saddled with the job of getting these survivors to the safe zone. With a motley crew of truck drivers, college kids, veterans, a drug dealer and a rock star, they are racing the clock to make it before time runs out. The last text he had received from his wife before the cell towers went down told him she was trapped in a high-rise in downtown Atlanta and their son was in detention, stranded in the basement of the school he attended. Gunny just wanted to drop the hammer, steal some guns and blast his way in to rescue them but duty called. He had to get these people to safety first, then he could recruit the best of this crew to help him save his family. If they survived the journey.

Why did you decide to create an audiobook?

As an avid audiobook listener, I wanted the option to be available. I also have a few guerilla marketing ideas that is catered specifically to audiobooks. I haven’t implemented any of them yet so I don’t know if they work.

How did you get started? Did you talk to a friend? What company did you use? How did you find a narrator?

I listen to a lot of books and I really liked the range and and sound of Eric Shelman’s voice. I contacted him directly and he told me how to set up an account through ACX. A well know voice actor will sell your books for you. They have fans, same as writers. You will pay more for them but it’s worth it. He read the synopsis of the book and agreed to do it. One important thing, as the author, you need to provide the narrator with a complete list of characters and a brief description of each. Let them know what you think they sound like if it’s a distinctive accent. East Coast, British, Spanish, Gruff, Soft Spoken, Always Angry etc. The narrator probably won’t read your book before he starts narrating. Don’t have him waste his best Big Deep Rumbling Black Man voice on a character you’re going to kill off in chapter 3 if you have another Big Black Man in the group who survives the whole series. Remember, he probably only has about 6 or 8 unique voices he can use, other than distinct accents.

What did you think of the experience? Was it difficult? Was it time consuming?

Very easy. There’s a bit of a learning curve as with any new process but once I got the account set up and sent him the book, all I had to do was listen everytime he uploaded a chapter, usually about 2 a day, and let him know if it needed any corrections. If you don’t have a voice actor in mind that you want to use, the ACX page has plenty of options for you. You can listen to samples, find a voice you like that fits your book and ask him to read a page of your work for you. Picking the right voice is important. Male or female. Cultured British or soft souther drawl. Find one that fits the tone of your book since most of it will be in his natural voice. (Unless you have heavy dialog and not much else)

Pretty good. It released in Feburary and as of the end of May, I’m $95 from having it completely pay for itself. It’s averageing selling about 75 copies a month.

Would you do it again? Was it worth it?

Absolutely. I’ve already contacted Eric and he has reserved a slot for me. If you chose a popular voice actor, expect it to take a few months.

How do you promote an audiobook?

I haven’t tried anything audio specific yet. I ensured it was available with whispersync. I’m trying to make money over the long haul, not get rich in 6 months.  Eric is an author as well as a voice actor and has a huge fan base. I capitalize on that. I believe a lot of people bought the audio because he recommended it and it was cheap.