You’re eighteen. Bored. Dad’s away a lot. Says its business, but you’ve seen the lipstick stains. Mum’s home. Too much. Keeping the world gin market afloat on her 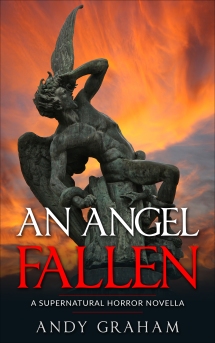 own. There’s Ariel, the family maid. She’s cool. The one piece of this messed up world that makes sense. And then there’s Raph.

Raph’s the leader of your gang of two. He gets off on doing those things to the animals you both catch: the slicing, crushing, and maiming. Buried a few alive, too. His relationship with that hammer of his is sick.

You run with Raph because, well, nothing else to do out here, right? Except if your folks found out what you’ve been up to, there’d be hell.

Then you find it. Whatever it is.

Time to choose. Do you run with the human devil you know, or take a chance on this thing that fell from the heavens?

An Angel Fallen is a tale of divine retribution from British author Andy Graham. On a day when the world is struggling to stay sane, and is being ravaged by biblical plagues, what price will two teenagers pay for their past?

1 What gave you the idea for An Angel Fallen?

I saw a post on Facebook. Two teenagers had tortured a dog to death. Cut its ears and nose off, broke its legs. Gutted it and hung it from a nail on a wall. They took a selfie and posted it online. The whole thing was repulsive. As I was trying to get my head around why people do things like this, I wondered what would happen if the dog could get its own back. Would it do the same thing to the boys or would it let them live? At some point in exploring the idea of vengeance, that dog became an angel. I’m not entirely sure when or how that happened, but once revenge becomes divine retribution, you’ve got a whole new set of rules to play with and break. That was one of the things I really enjoyed in writing this book – messing with reality. That and getting my own back on the two teenagers who murdered the dog.

2 What got you into writing in this genre?

As a species, we are capable of incredible generosity, kindness and heroism. We are also unparalleled when it comes to cruelty. The degree of creativity and ingenuity that people have when it comes to insults, punishment and death is astounding and depressing. Writing gives me a way of dealing with the latter – it’s a form of therapy. Maybe there are better ways of getting my head around this, maybe in the future I’ll find that writing happier stories will be better for me, but at the moment, dark fiction and horror seem to help me process the depths to which humanity can sink.

4 What tools do you feel are must-haves for writers?

Scrivener is a great multi-purpose tool and is fairly easy to get to grips with. I do most of my writing and editing in it, and I format my books with it. It does have limitations, but that may be due to my technical skills rather than anything else. (I am the Arch-Luddite.)

However, much as programs like Scrivener make things easier, I don’t think any tool is essential. You need something to write with and on (how many great books were written using pen and paper?), but otherwise it’s the mindset which is more important: patience, discipline and a touch of inspiration.

5 What is the best piece of advice you ever received from another author?

I’m not sure who said that first, I have a feeling I first read it in an interview with Stephen King. It’s probably the advice I would give a newer author than me.

If I had to add a second piece of advice, it would be not to worry about what other writers are doing, e.g. their daily word count, how many hours a day they write, how quickly they produce books, and so on. Do what you do. Do it well. Enjoy what you do.

6 How do you market your work? What avenues have you found to work best for your genre?

I write guest blogs for other websites than my own. As for how well it works, ask me in a month! J

7 What piece of your own work are you most proud of?

This one – An Angel Fallen. Once the idea had formed in my head, the writing was relatively easy. When I say relatively, it wasn’t entirely blood-free. I’m not so much a word-smith who can write out beautiful prose with ease, or a word-slinger capable of pumping out thousands of words a day. I wrestle the words onto the page – sometime they stick, other times they twist and I have to hammer them into submission.

The first draft of this story was the cleanest I’ve written. Only a few minor plot tweaks, a couple of places where I’d got carried away with the adjectives, one name change, but otherwise the first draft was essentially the final version.

8 For those who haven’t read any of your stories, what story/book of yours do you think best represents your work and why?

Again, probably this one. It’s a good mix of prose and dialogue, where some of my earlier books were a little more adjective-heavy. The plot is simple but interesting and I’m over the newbie writer issue of trying to be too clever and cram in too many ideas and twists.

An Angel Fallen is darker than my main series The Lords of Misrule. There are unpleasant elements in those books, but they’re a lot less concentrated as that series is full novels rather than novellas.

9 What are you doing next?

I’m about a third of the way through book four of The Lords of Misrule. I’m finding it rather hard going, to be honest. I’ve been suffering from a heavy dose of ‘real life’ at the moment and things keep getting in the way. I’m aiming to have book four out by the end of this year. From there, who knows…

I have an idea for a second novella like An Angel Fallen. It won’t be a true sequel but may feature one or two of the characters again. I also want to write some more short stories so I can add to my first collection of shorts. I like the length, it’s fun to write, and being able to finish a project quickly is good to keep things moving.

10 What advice would you give aspiring writers?

Andy Graham is a British author currently living in the Czech Republic who will now stop talking about himself in the third person because it’s odd.

I have two main collections of books: The Lords of Misrule is a series of dystopian political thrillers set in an alternate world based on life in 21st century EU/ US. I also have an expanding collection of creepy reads that explore the darker side of life, death, and the undead. There are a few unfinished stories rattling around in my hard-drive, and some unstarted ones knocking around in my head. They range from disposable airport fiction and YA sci-fi to grimdark epics, but they will have to wait their turn. (Unfortunately for my wife, who is waiting for me to write something ‘nice’, preferably with sparkly vampires.)

Outside of reading and writing, I’m a musician, qualified osteopath, seasoned insomniac, and father to two young kids who have too much energy to let me grow old gracefully.

You can find me online at http://www.andygrahamauthor.com (and can claim a free book), on twitter – @andygraham2001, and on FB – andy graham author. 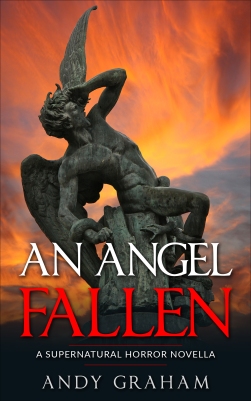