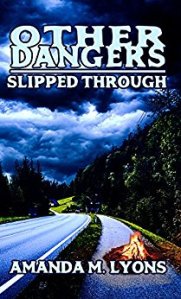 Book Name and Description: Other Dangers: Slipped Through

Henry is a man with trouble on his hands. Setting out for this weekend getaway wasn’t even his idea and now he’s woken up from a terrible car crash to find himself in a strange place where nothing is as it seems. Now his whole life has changed and nothing he knew to be true seems to matter, not when the world is filled with horror and still other dangers waiting in the shadows. Worse, his wife is hurt and there’s only one woman who can help them get home, a woman who is more mystery than truth and holds the road map to a world without rules…a map which comes in the form of a book hidden in the depths of the backpack in her possession. A book that calls his name and the woman shows him she would do anything to keep out of anyone else’s hands.

What gave you the idea for Other Dangers: Slipped Through?

It all started when I was quite a bit younger and fell in love with zombie movies. I had 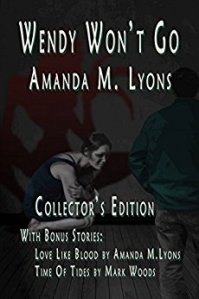 been watching them for a while and really liked the variety of causes for them to take over the world, but I noted a lot of them revolved around sudden contagion or some sort of curse and I couldn’t help but wonder what if it was something a bit different? Along came In The Mouth of Madness, which was another sort of apocalyptic film altogether, and I though, What if it wasn’t contagion or a curse but something more complex and related to human fallibility? What if you had this middle-aged author who was consumed with self-hatred and she really wanted to feel like she was achieving something much bigger with her life? What if that had so consumed her that she risked everything and everyone to get what she wanted only to see what a horrific monkey’s paw it could become?

Henry came in much later, I had this visual of a large man walking down an overgrown highway with his wife on his back and a thin woman I realized was Abby escorting him along. I wanted to see who he was and why he was there and then I got that this regular guy, just a typical suburban guy with a chip on his shoulder as big as Abby’s at the beginning of her story, fell through some sort of gateway into Abby’s reality, that he was stuck there until she could get him to another point where he could get back but there were all these variables along the way that could utterly destroy him and his life. Abby wants nothing to do with him, she’s had it with humanity and herself and she doesn’t want a man from a more grounded version of reality getting eaten alive by the nightmares in hers, so he can go back relatively intact with a blip in his life instead of something much worse, but she’s forgotten the siren’s call of what she did and the way it’s still consuming everything it touches. Will he get out safely? Will his wife? What does Abby represent now and what all happened when her world ended? It’s horror meets sci-fi meets fantasy and mystery, the great big story that has a little of everything.

This is book one of a series that will probably be about four in the end, possibly more depending on where it takes me.

I’ve been writing since I was around 12. For most people that means they tried but weren’t really serious about it until they were older, but I really did engage with it starting then, doing research and building my skills as soon as I felt I was a person who could write. That makes it roughly 25 years now.

I’ve gotten a lot better at refining a story to the best ratio of detail and plot, certainly since my high school days when I was taught to “use the razor”, and especially since I became an editor myself and learned to refine even more. I’ve also become much broader about what I’m willing to write and how complex it can be. I’ve co-written books, tried sci-fi, bizarro, splatter punk, and erotica, all of which came after I started working with JEA and I got a push to be more inventive and take part in more ideas that I might not have considered before. I’m also quite a bit more aware of some of the subconscious and psychological elements now, so I can use them to both produce catharsis for myself and develop those elements to affect the reader.

What tools do you feel are must-haves for writers?

An open, fertile mind, a capacity for imaginative thought, a good grasp of grammar and solid writing reference books to keep that understanding fresh and refreshed when we forget, lots of experience reading great authors, an interest in research, and a good attitude to help you dodge bad reviews and community drama alike.

Marketing is a creature that is always changing so you have to change with it or find good folks to give a hand when you’re lost. As much as authors tend to share their links everywhere I do think we all do better when we can use author interviews, blogs, and maybe a good ad (paid for or made yourself with basic programs out there)to do the same work. The trick is to get readers interested without annoying them first and then getting a good review from them by writing something worth their investment once they’re hooked. It’s also a good idea to have your work out in ebook, paperback, and audiobook to widen your market.

What piece of your own work are you most proud of?

I think it changes all the time, sometimes it’s a short story like She Walks with Me where I managed a really strong narrative that was about a complex relationship between a heroine and her scribe, while other times I think of something like Wendy Won’t Go, where I tackled quite a lot of personal trauma and fear in order to make a unique ghost story out of tackling what could have been my own death. My longer works can be more complex for me, I rarely ever wholly love the entire thing so much as bits of the narrative or a scene I worked really hard on.

I think possibly Wendy Won’t Go. It’s a long short more than a novel, but it has depth and it’s a good introduction to the literary narrative I use for most of my work, also the emotional depths and psychological and surreal elements that I seem to favor.

I’ve got several short stories and novels going in various levels of completion, the soonest are likely to be Other Dangers: This is How the World Endswhich takes up where we left off in Slipped Through, and possibly some of my shorts like the one about the serial killer who kills cats and the one about a woman who sees beyond our world called I am Agony so far. I’m hoping some of the others will be along soon as well, like Night is Falling, which is about an alien invasion, and possibly Vast Ocean/Vast Seawhich is a longer version of my story “Vast Oceans” which was in Fearotica. I’m also co-writing a novel with my father, R. E. Lyons, called The Abyss Within, about strange changes on a farm in a rural community.

A longtime fan of horror and fantasy, Ms. Lyons writes character driven novels that, while influenced by the dark and gothic, can also be heavily laced with fantasy, romance, history and magic. Amanda M. Lyons has lived her whole life in rural Ohio, where she lives with her fiancé and two children. She is the author of Wendy Won’t Go: Collector’s Edition, Eyes Like Blue Fire, Water Like Crimson Sorrow, Cool Green Waters and Other Dangers Part 1: Slipped Through, all available from J. Ellington Ashton Press. She is also the co-author of Feral Hearts with authors Catt Dahman, Mark Woods, Jim Goforth, Edward P. Cardillo, and Michael Fisher and a contributing author to the extreme horror anthologies Rejected for Content: Splattergore, Rejected for Content 2: Aberrant Menagerie, Rejected for Content 3: Violent Vengeance and several others.
Look for titles like Other Dangers Part 2: This is How the World Ends, Vast Ocean/Vast Sea, Night is Falling, Hollow Black Corners of the Soul, Jodie, Her Shadow Within and others in the coming future.