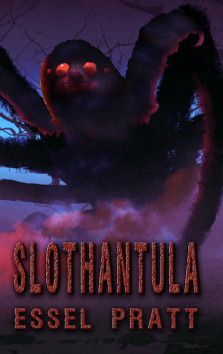 What gave you the idea for Slothantula?

After finishing Sharkantula, I wrote a short epilogue where the spider Lucille entered an animal crate that contained a sloth. It really wasn’t meant to become a sequel, but as I continued to think about that ending, I couldn’t help but outline the book and see where it took me.

Honestly, I never really planned to write in any genre. I’ve always navigated toward horror, but I enjoy Sci-fi and fantasy as well.  Writing about genetically engineered beasts just seemed to be a natural direction to go.

I’ve been writing seriously since about 2014, but have been writing since I was very little. My active imagination almost directs me to write to ward off the insanity within.

Where do I start? I have 12 books released thus far and well over 100 short stories published in various anthologies.  They range from fantasy to hard core bizarre horror.  I guess the most I can tell you is that they all come from a special place in my heart, one that desires to share the imagery inside my head with the rest of the world.  I don’t claim that they are all good, or any of them for that matter, but I have fun writing them.

When I write, it cannot be quiet.  I find that silence is deafening to the point I can’t focus.  So, I usually have music playing. No specific type of music, just something to keep the quiet away. I don’t set a word count or a goal to finish something at a specific time.  I tend to let the words write themselves at their own pace.  My highest word count in a day was around 20 thousand, my lowest is none.  But, I feel just
as accomplished either way, because what I wrote, or what I didn’t, was dictated by the story, not an imaginary timeline.

My favorite books is not a single book.  I’d say it is a tie between all books in the Chronicles of Narnia series, To Kill a Mockingbird, Alas, Babylon, Lord of the Flies, and Everville.  Each tells a story that draws you in as a reader, makes you part of the story, and imbeds itself into your life in some magical way.  The book that disappointed me the most is The Secret Life of Lazlo Count Dracula. It’s strange, I sort of enjoyed the direction it took, but I could never finish it. Someday I plan to, but I’ve been meaning to for over twenty years now and have not done it yet.

How do you think you’ve evolved creatively?
I’ve let go of my inhibitions. In the beginning, I’d hold back and be afraid to hurt the feelings of the readers.  But, I learned that playing with the readers’ feelings is the point of writing.  We want to make them happy, make them cry, piss them off, all while keeping them engaged.  I think I am much closer to that than I used to be, but still have some work to do.

What tools do you feel are must-haves for writers?Their imagination, without that, there is really no point of writing fiction.

What is the best piece of advice you ever received from another author?Just write. It doesn’t matter what you write, if it is good, if other people read it. Instead, just write.

Essel Pratt is a master of horror and fantasy, conjuring tales that haunt souls and inspire imagination. As a student of psychology and teller of tales, Essel writes to share the complex nature of his imaginings with the world. His ever-expanding catalog of short stories spans multiple anthologies and collections, ranging from whimsical fantasy to bizarre horror, including everything in between. Dedicated fans have praised his creations, labeling his talents as prolific in substance.

Hailing from Mishawaka, Indiana, his passion for writing began in the early years as his imagination taunted from within, begging for a release. Dabbling in art at first, he found that the stories that pleaded to be told could not be imprisoned by ink and paint alone. His most notable and prevalent accomplishments include Final Reverie, Sharkantula, and the multiple short stories that have garnered a following of their own, such as the adventures of Detective Mansfield.

Inspired by C.S. Lewis, Clive Barker, Stephen King, Harper Lee, William Golding, and many more, Essel doesn’t restrain his writings to straight horror, instead exploring the blurred boundaries of horror within its competing genres, mixing the elements into a literary stew.