Abstract Island by John Ledger – 5 out of 5 skulls 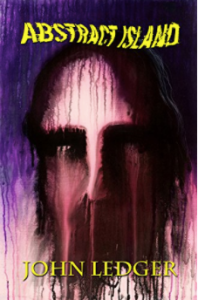 the far limits of human depravity and inhumanity. Both victims and victimizers as well as several that fall simultaneously into both categories stalk through these pages. Though the stories display a wide variety of settings and themes, a common motif is the response of normal women and men confronted with sudden violent threats to their continued existence.

This collection is not for sensitive souls or the weak of heart. But for those who like strongly horrific fare, with plenty of sex, violence and sudden gut-wrenching twists of fortune, an evening or two spent vicariously experiencing the plight of the victims of these stories can be creepily invigorating.

“Mason Lane”, the opening story, and one of my favorites, tells the tale of a mysterious stranger with a pack of hell hounds who visits a neighborhood cul de sac. His presence brings about a strange transformation in people, causing them to viciously attack each other. “Anarchy Camp” is about a group of homeless people who take up living quarters in an abandoned train station. A young local seeking to discover the truth behind the demonic legends about the camp, soon finds himself in way over his head. In “Father”, a young man’s father takes his own life just before being arrested for the serial killing of 30 women. But is Father the actual perpetrator? The “Mountain of the Frozen Bus” presents us with the time-honored message: don’t mess with Bigfoot. In “A Drowning Whisper”, two bound women, apparently kidnap victims of a mad man, discover a way to escape from his cellar. But is it a staged escape that will lead to consequences far worse than the captivity would have been? In “Storm Warning”, a demented acquaintance makes life more than miserable for a woman and several of her innocent friends. If your best childhood pal was a sadistic psychopath back when you knew her, like “Jenny”, it might be best not to yield to the urge for a nostalgic visit to your old stomping grounds. In “Full Moon 666” a devil cult member hitches up with a werewolf in a relationship that is even stormier than might be expected. In “One Sunday Morning in Hell”, a man dreams of spending time in Hell and discovers when he awakens that that’s where he’d rather stay. “Animals”, a novella, is the most brutally violent of the stories, recounting a rampage committed by three criminals who are commissioned to fulfill an atrocious mission by a woman who used to live in the town.The last story, “The Davenport Chronicles”, is also a novella, relating a strangely surreal account about the people who live in a large, mysterious mansion in the middle of town.

Assuming that the reader has a penchant for extreme horror, this anthology is a rewarding series of forays into places we’d never want to visit in our waking lives. I look forward to reading more of the writings of John Ledger.

(Review by Gregg Zimmerman, author of Queen of Bones)