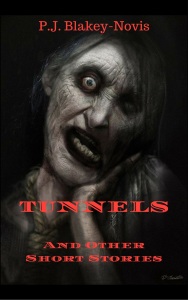 What gave you the idea for Embrace the Darkness?

The short stories in Embrace the Darkness are quite varied; there is one based around an operation I had on my foot, one which stems from a nightmare I had as a child, and one which deals with mental health / abandonment issues.

I only started writing horror at the beginning of 2017, after seeing a call for submissions. I was fortunate enough to have the story accepted, and actually paid for, which gave me the confidence to write more in the genre.

My debut novel, The Broken Doll, was released in February 2017 after around a year of working on it. It is not a horror story, but more along the lines of Fatal Attraction with a rather scary femme fatale theme.

I released The Broken Doll in February 2017, which was well-received and motivated me to work on a follow-up book. The sequel to The Broken Doll was released in August 2017. Last year I released two collections of short horror stories (Embrace the Darkness & Tunnels), both of which have received fantastic reviews. Just before Christmas I also published my first children’s book, co-written with my daughter who was 8 at the time. I’ve also had stories included in a few anthologies.

I have a fairly set routine when it comes to writing; if I didn’t set specific times aside them I would just be pottering about online and trying to promote the books rather than writing them. Currently I set aside an hour each day to write, which sometimes becomes more if the story is flowing well. I typically spend an hour each day on promo work as well. I run a few other projects, including a digital magazine (Indie Writers Review), and a horror book delivery service (Boxes of Blood) so I’m kept pretty busy most days.

What is the best piece of advice you ever received from another author?

Ignore negative reviews, unless there is some constructive criticism that can be taken from it. I’ve been fortunate enough to have had almost all good reviews, but there have been a couple that got to me (although they didn’t actually write anything, just left a low star rating). The only 1 star I have had was actually from a family member so that stung a lot, but it just pushed me to work harder. After a couple of days of feeling really low about it, I sent some free copies of that book out to some bloggers and received a number of 4 and 5 star reviews which more than balanced things out.

Social media is a must-have, I feel. There are plenty of ways to market your book without having to spend any money, it is just a huge amount of time to invest. I currently use Facebook to promote a different book on each day, in various groups, as well as Twitter and Instagram. I recently set up a Pinterest page for my books, the magazine, Boxes of Blood, and as a way to promote the books that I have read from other indie authors. I have experimented with paid ads on Facebook and Amazon which have worked to some extent but not been great value for money. I also give away single stories to subscribers on my mailing list, as well as attending any events in person that are near enough to me geographically.

What piece of your own work are you most proud of?

I think the short story Tunnels is one of my best, and was a lot of fun to write. It takes place during a ghost hunt at an old wartime fort, which is actually near to where I live, and where they do actually hold ghost hunts. There are a couple of stories in Embrace the Darkness which are rather personal to me, and are based closely in reality.

Both collections of short stories are quite different; Embrace the Darkness is best described as psychological horror, whereas Tunnels, which leans more towards the supernatural and is certainly more violent, has a scarier element to it (depending on what the reader finds frightening).

My third collection of short stories should be released mid-July, so hopefully it will be out by the time this is being read. I also have a novella in progress which I’m hoping will be out around the end of September, and a rather unique horror book is in the very early stages.

P.J. Blakey-Novis is a British writer, living on the south coast of England. He is the author of The Broken Doll, The Broken Doll: Shattered Pieces, Embrace the Darkness, Tunnels, and Grace & Bobo. He is also the co-founder of Red Cape Publishing, the name behind Indie Writers Review digital magazine, Boxes of Blood horror book service, and Red Cape Graphic Design.