Tell-Tale Publishing runs their “Scariest Opening” Contest – writers submit the first 1500 words of a story that is either completed or in progress. My story, Vacuity, won the contest in 2017 earning me the “Vincent Price Scariest Writer Award” and the title rights for their annual horror anthology.
Vacuity is the story of a female psychotic schizophrenic who finds herself in a maximum security mental ward after killing her caregiver. Is she now on the road to recovery or about to embark on a bloody mass murdering spree? Perhaps it’s all just in her head!

Essence Asunder– Released June 11, 2018 by Hellbound Books Publishing – This novella is my first solo release! Essence Asunder tells the story of Jacob Falgoust who awakens in a dark basement strapped to a bed of nails with no idea how he got there or why he’s there. It is a story of unrelenting torture and pain with no escape. Jacob comes face to face with Pain and Misery, personified, with a way out if he can answer one simple riddle.

Horror Addiction: Is There A Cure?(humorous essay) in The Next Great Horror Contest: Editor’s Picks from HorrorAddicts.net
Kairos Chamberin Tenebrous Tales from Stitched Smile Publications
Living Monstrosityin What Screams In The Dark from an independent publisher
Esoteric Surgery(short story) and Flesh Passion(poem) in Worth A Thousand Words from an independent publisher
Death Revengein Flash Fiction Addiction from Zombie Pirate Publishing

What gave you the idea for Essence Asunder?

Crazy enough Essence Asunder is the first story I ever wrote from start to finish in 2012 when I decided to see if I could actually write. I was in a bad place mentally and very angry which I tried to channel into writing. In my dreams of grandeur back then, I intended to write a collection of short stories inspired by my love of heavy metal. I did that but soon learned that no one wanted a collection from an unknown author. At the beginning I knew nothing other than I wanted to see if I could write anything at all. Turns out I could or so it seems.

For me whether to write horror or not wasn’t even a consideration. I love horror books & movies and have since I was knee high to a grasshopper as my grandfather used to say. There was no decision, I think horror and I write horror, period.

Every story I have written or will write in the future is inspired by music, specifically metal. Every one of my stories shares a title with the song (or sometimes album) that inspired that particular idea. I do not try to tell the same story as any particular song, they tell their own stories. It’s simply my way of paying homage and respect to the music that has given me so much throughout my life. I feel like every story I write is me paying my debt to what music has given me. I couldn’t write without music and I wouldn’t be alive to tell my stories without it either.

My influence is pretty obvious from my last answer so I’ll answer the other parts, LOL. My writing process is pretty simple though it has expanded now that I have more experience. First, I’ll get an idea (I know duh, right?) which is always something simple maybe one sentence or even less. For instance, this is an actual idea I wrote down recently: “Man goes fishing after killing his wife.” If my mind keeps coming back to a particular idea then I have to write it. At that point I expand the idea with a few plot points (I may not stick to them) and come up with character names for at least the mains. Then I put on the headphones, open a new word doc, crank up the volume and begin to write. From there it all depends on the length of the work. If it’s flash fiction or a short story I’ll work until it’s complete whether that’s a few hours or a few days. I generally write fairly fast but deadlines help. If it’s something longer like a novel I write as much as I can each day and keep notes for future reference in case I’m unable to write for a few days because of life. Notes also help me keep little things like hair & eye color, height, weight etc straight. I’ve been known to switch a blond to brunette or blue eyes to hazel if I don’t make notes.

My favorite book without question is Imajica by Clive Barker. I devoured King from early on but Barker’s use of language takes my mind to a different level. I rarely dream or, at least, I rarely remember dreaming but when I read Barker, especially Imajica, I do and it’s amazing.

I can’t name a specific book that disappointed me but that’s not a dodge, I promise! The reason I began writing, the reason I felt I had to try, was I read several books in a row that were all disappointing usually in their endings. Either they were utterly predictable, relied 100% on some terrible deus ex machina or were simply stupid. After bitching and thinking about it for a long time I felt I needed to put up or shut up. Hopefully my endings don’t disappoint!

I don’t ever want to stop evolving or get complacent like I see a lot of authors do once they find success. *cough King cough Patterson cough* When I first sat down to try writing in 2012 I knew nothing really. I mean I knew how to form a sentence and spell and grammar but that was all. The term “word count” was foreign to me and I had no idea what made a story flash fiction, a short story or a novel. And getting published? Let’s just say I knew Jack Shit, I knew him very well! Since those first few words that begin Essence Asunder (I never changed them!) I’ve learned a lot and I’ve written a lot. Since those first few words I’ve written a few million words between storytelling and writing reviews for my old website. Writing is just like anything else, you have to practice, practice and then practice some more. Everything is practice.

What tools do you feel are must-haves for writers?

If you want to be a writer you must have passion & patience. If you’re expecting a quick buck then either do something else or prepare for heartache. There are no true “overnight” successes as writers. You have to work your ass off and then work even harder. Even then there is no guarantee of ever seeing success, many writers biggest successes came after they were dead and gone. Don’t begin writing if money is your motivation or you’ll burn out faster than a drop of gasoline in a fire.

What piece of your own work are you most proud of?
I’d say I’m proudest of Black Lodge which appears in Demons, Devils & Denizens of Hell: Volume II. There’s just something special about that story to me, I can’t really explain it. There are some personal references in that story and I also had a respected writer/director request to read it but I was proud of that story prior to anyone other than myself reading it. It’s a simple story, it’s my take on the classic Faust tale of someone (a writer in this case) selling their soul to the devil (or simply a dark entity in my tale). I can only hope others like that one as much as I did. It’s also probably the least bloody and gory story I’ve written. 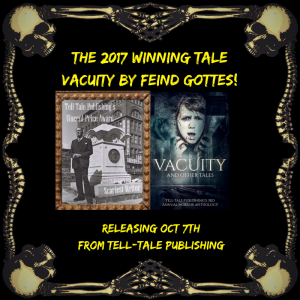 For those who haven’t read any of your stories, what story/book of yours do you think best represents your work and why?
Well, I’d say my novel but that won’t be out until early next year. Honestly, it’ll sound like I’m just trying to market my latest wares but my story Vacuity is probably the best representation of where my head and writing skills are at the present moment. Vacuity has blood and gore but it also has a lot of tension building, character development, suspense and psychological horror in it as well. It also isn’t that short coming in at about 23k words which is also where my head is at, longer works. So, if you want an idea of what I have coming in the future I think Vacuity is very representative.

I am so f’ing excited to get started on my next project! Currently I’m mired in the edits of my first novel but that story itself has been completed for months now. What I plan to write next is a trilogy of novels which are an alternative history, of sorts, based around the Cain & Abel mythos mixed with some others. The first book is all plotted out, something I’ve never done before and the second two are partially plotted out. I also have about a dozen pages of notes and research which is also something I’ve never done before. Originally the plan was to write one novel but as I began fleshing out the idea, adding to it, it became quite apparent it would take three novels to tell the story I wanted to without cutting major corners. I’m a huge fan of blasphemy so expect a trilogy of books that any religious types will 100% hate.

I’ve given this advice many times but it can’t be said enough, Just Write! Write, write and then write some more. Shortly after I began writing I read an article that stated you can’t even begin to master a skill until you’ve spent a minimum of 10,000 hours doing it and then there’s no guarantee. I’ve found no reason to doubt that logic. I’m pretty close to that 10,000 hour mark and I can tell you that I’m no master writer yet. So just keep writing!

In 2017 Feind placed in the Top Ten in The Next Great Horror Writer Contestsponsored by HorrorAddicts.netthen later won the 2017 Vincent Price Scariest Writer Awardfrom Tell-Tale Publishingwith his story Vacuity, now published inVacuity and Other Tales.

2018 marked a milestone for Feind with the publication of his first solo published work with the unleashing of his novella, Essence Asunder, by Hellbound Books in June 2018.

Lastly, Feind won the Dark Chapter Press Prize 2016novel writing contest with the first draft of his first novel, Piece It All Back Together, which is currently being edited for an early 2019 release from Stitched Smile Publications.