Book Name and Title: Chaos Tales I and Chaos Tales II: Hell TV.  I decided to call my short stories Chaos Tales when I was fourteen or fifteen and twenty-something years later I still like it. 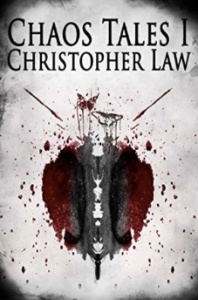 Originally they were all going to be collections of unrelated stories, as they are in the first volume, but as I was writing the shorts for Hell TV I found that I liked them more, and found them easier to write, with a linking thread. I think that both Hell TV and Infodump (when it gets released) can still be dipped into but they are much better if you read them from start to finish.

What Gave You The Idea For Hell TV?  Like most of us from the pre-digital world, particularly in Britain when we only had four channels, I spent a lot of my childhood and teens watching TV or films that weren’t only not my choice but were things I genuinely hated, but had to endure if I was going to get my turn to choose. I have a loathing for films like Dirty Dancing and Ghost that is only matched by my sisters (one older and one younger) boredom at yet another action film.

To make the experience a little more endurable I’d imagine twisted versions of whatever it was that I didn’t want to watch. Most of them were as childish and puerile as you’d imagine but the idea stuck with me. After the onset of reality TV and the plethora of channels we’ve now got in Britain there were just too many targets to aim for and I had to write the thing. I’ve actually got enough for three or four more volumes, plus all the suggestions I’ve received since Hell TV came out. I might come back to them in the future but, for now, I have other plans my particular version of Hell.

What Got You Into Writing Horror? Like so many others I started writing stories when I was a 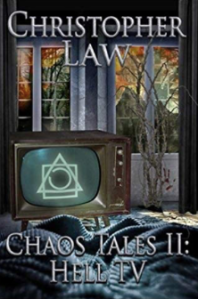 child – I just saw it as another game. Back then, and into my early teens, I mostly wrote sword and sorcery type fantasy but there was always a tendency towards monsters, fear and gratuitous bloodshed. Then, when I was finally allowed to start reading and watching horror, I decided the elves and dwarves needed to go. The fact that my teachers disapproved was the thing to get me really committed.

What is the writing process like for you? What is your writing day like? What have been the biggest influences on your writing?  I’m not very good at forcing myself to write so I tend to only work on something new when I’m really in the mood for it, and have at least three or four hours spare to sit down and crack-on. I understand the logic of writing at least a little every day but it’s not an approach that works for me – aside from anything else I find that forcing myself makes it feel like a chore and that makes me lose all interest in the idea. Editing or rewording, however, I can get on with even if the creativity isn’t sparking and I have enough works in progress that there’s always something I can do. When I do sit down to work, on something new or old, it’s at my PC in my bedroom with plenty of cigarettes with some music in the background – I’m definitely not someone who can write anywhere at any time.

What is your favourite book (other than your own book, of course) and why? What book disappointed you and why? I can’t choose a favourite, if only because I’ll probably change my mind in ten minutes time. It’s also quite rare that I’ll read something, within horror at least, that really disappoints me. Like a lot of people I was (and still am) angry that The Scarlett Gospel was so poor and I’ve never cared much forThe Dark Tower but, as a general rule, I think the calibre of writing in horror is exceptionally high.

How do you think you’ve evolved creatively? At the most basic level, I’m not really sure if I have. I still want to write stories that hurtle along to a mostly unhappy ending and leave the reader thinking ‘ewww…I’m glad that isn’t real’ but I have learned that less is more, logically at least. Emotionally I still think I’m letting either the story or the reader down by not including absolutely every little detail I can think of. The vast majority of my editing/rewording time is spent explaining to myself that I convey the feeling I want far more effectively by leaving out the fact that my main character had an itchy nose when they said something, or that I don’t need to include the comprehensive history of my bit-parts/cannon fodder. I still include all that stuff in my first drafts, because that’s how I tell the story to myself, but I’ve learned to be cruel after that. It isn’t so much a case of killing my little darlings as it is pulling weeds from the garden path.

What piece of your own work are you most proud of? Out of everything I’ve had published, by myself or through others, I’m proudest of Hell TV. It is pretty much exactly what I wanted it to be, even though I wasn’t entirely sure what that was when I started – I had a feeling and a few ideas. I think I’ve done a better job with Infodump, but until it’s finished and released I’ll not be able to say for sure. Recently I’ve also had a lot of praise for My Familiar And I – which is in Chaos Tales I – which I’ve found surprising for a story I thought was kinda silly and throwaway. I actually got told that it creeped someone out for days, which is like manna from heaven for a horror writer.

What are you doing next? I’ve a few things planned. First up is getting Infodump finished and released, after that I’m planning to get my novels finished. Then it’ll be a case of seeing how many of my other ideas I can get done before it’s my turn to shuffle away from the coil.

Biography: Christopher Law lives in the South East of England and is the author of two short story collections and several others that are available in anthologies, mostly with the lovely folks at Burdizzo. His third collection is in the final stages of editing and should be out by the end of this year/the beginning of next. He also has a number of novels in varying states of completion that are looking for help and homes.